The government is urging the public to help reduce the number of mosquitos in the wake of a recent spate of heavy rainfall.

Members of the public are being asked to clear up their sections by removing overgrown vegetation and disposing water-retaining containers to prevent a further influx of mosquitos.

Public health officials said a 400 metre radius of cleared vegetation around homes is required to reduce breeding and resting environments for mosquitos.

Te Marae Ora Cook Islands Ministry of Health (TMO) has reported two new Dengue-2 cases for the month of February, bringing the total number of Dengue infections for the month to 30.

The government’s mosquito eradication programme has been severely affected by heavy precipitation, with rain nearly every second day on Rarotonga for most of this year.

As a result, public health officials in Rarotonga have been unable to conduct peri-focal spraying of the homes of confirmed and probable dengue cases.

In addition to keeping their sections clean, members of the public are reminded to avoid mosquito bites in the daytime – particularly at dusk and dawn – by covering up, applying insect repellent diligently throughout the day, and keeping mosquito coils lit around the house.

Officials also recommend the use of mosquito bed nets and installing window screens on homes.

TMO advises members of the public to see a doctor if they develop fever, experience headaches or nausea, feel pain behind the eyes, or suffer from muscle aches. In the first instance please call the Heathline on 29667.

“We are asking people to be on alert,” said Secretary of Health Dr Josephine Aumea Herman.

“Keeping sections clear of overgrowth and preventing mosquito bites will assist our whole of society efforts to reduce the number of mosquitos and prevent further spreading of dengue fever.” 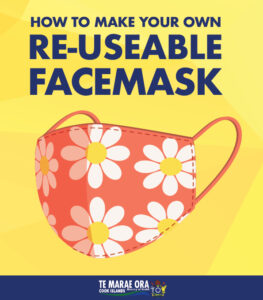 How to Make a Reusable Face Mask