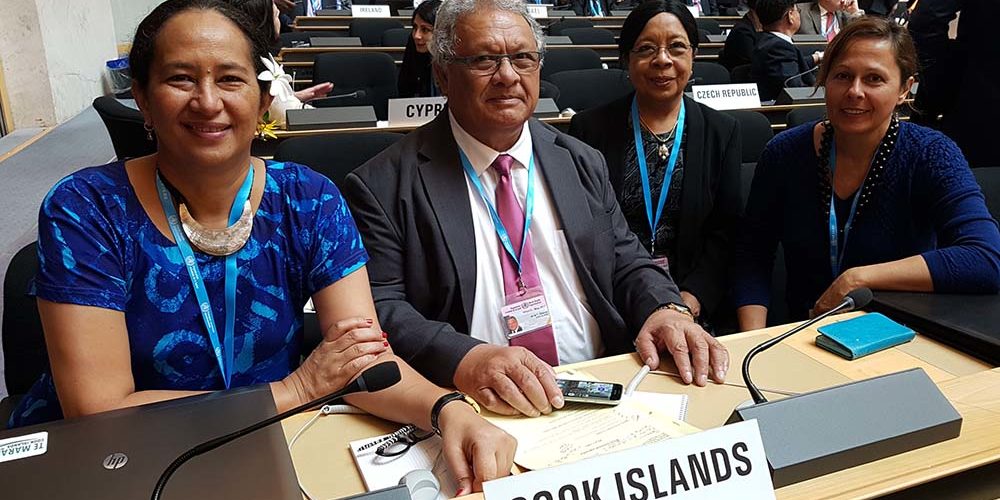 Minister Nandi Glassie will be speaking on behalf of the Pacific Islands Countries and Territories in the general debate plenary session. His address will reflect the theme “Advancing the 2030 Agenda for Sustainable Development: Building Better Systems for Health” at the 70 World Health Assembly in Geneva, Switzerland from the 22 to 31 May 2017.  Leading the Cook Islands delegation, he is accompanied by the Secretary of Health Mrs Elizabeth Iro, Chief Medical Officer Dr Yin May and the Cook Islands Honorary Consul in France Mrs Nathalie Rossette–Cazel.

Minister Glassie was also nominated to be a Vice President to the 70 World Health Assembly. When talking about this appointment he said

“It is my honour to be nominated to this position at this World Health Assembly, and I cannot recall the last time a Cook Islands Health Minister was recognised in this role. I will do my duties to fulfil the requirements as a member of the General committee”. This years Assembly will also appoint a new Director-General for the World Health Organisation.

The Cook Islands will co sponsor a side event with Australia as the lead Member State, titled “Towards Universal Eye Health: Taking stock of progress against the Global Action Plan – what’s working and where to from here?” and Minister Glasssie is expected to make remarks from the Cook Islands perspective during this session.

Health Ministers of PICT have recognised the importance of utilising the opportunity of their regional and international meetings to discuss matters of priorities for the PICT by organising side meetings before or at the break sessions.

“I am very grateful for the expanded team we have at this WHA and for the inclusion and support of our Cook Islands Honorary Consul Dr Nathalie as we continue to pursue best practices for our health care service delivery in our country” said Mr Glassie.