Minister Glassie opened the 71st WHA in his capacity as First Vice-President, being the first Pacific Health Minister to undertake such a prestigious role. This event also marked the 70th birthday for WHO, the peak global health body.

Minister Glassie as Chair of the Pacific Health Ministers (PHM) since the 12th PHM meeting in the Cook Islands in 2017, also chaired the PHM meeting in Geneva which included agreement on the assignment of health interventions that Pacific countries would be providing on behalf of the Pacific region. The aim of the PHM is to provide strong governance, leadership, accountability, and strategic direction regarding national, regional and global commitments on health matters particularly those which impact on Pacific populations in the region. Following the PHM meeting, Minister Glassie led the inaugural discussion of Pacific Ministers of Health and Caribbean Community Ministers of Health as Small Island Developing states (SIDS), and have set up a discussion group with the objectives of establishing a platform for collaboration initially focusing on Climate Change and Health. 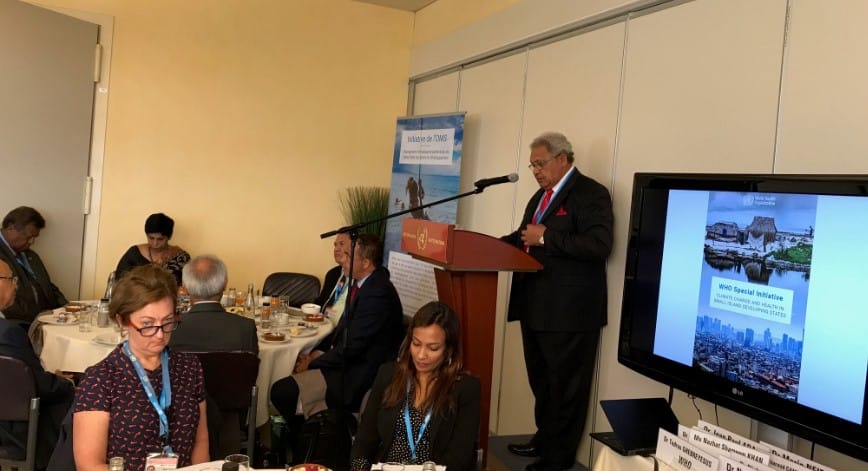 The Hon. Minister Glassie is held in high regard by WHO and his Pacific peers and his leadership style has helped place the Cook Islands and the Pacific region at the fore of important global health issues such as climate change, non-communicable diseases (NCDs) and health security. In meeting with Dr Tedros Ghebreyesus, Director General for WHO, Minister Glassie congratulated Dr Tedros on his leadership and opportunities for the Pacific Islands Action Plan on Climate change and Health to contribute to addressing the effects of climate change particularly in SIDS.

The New Zealand Minister of Health also hosted the Cook Islands and other Pacific countries to a breakfast where New Zealand introduced their candidate to the Regional Director for the WHO Western Pacific Region Dr Colin Tukuitonga. This follows a meeting of the PHM in October 2017 and extensive lobbying by the Cook Islands Ministry of Health together with the Ministry of Foreign Affairs and Immigration where Pacific island governments endorsed the nomination of Dr Tukuitonga as the Pacific candidate.

The Cook Islands has achieved much on the Pacific and global stage says Minister Glassie, “the challenge is translating such critical relationships into improved population health outcomes in the Cook Islands”. Dr Herman is progressing discussions with the New Zealand Ministry of Health regarding an Arrangement of Cooperation which seeks to improve the health outcomes of Cook Islanders across both countries.